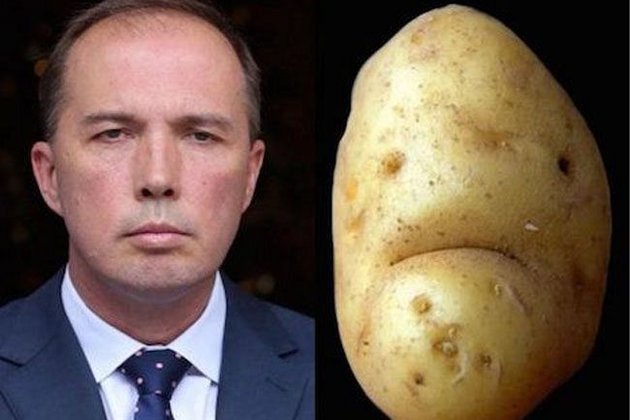 Back in 2016, IA founder and publisher David Donovan attempted to defend the then Immigration Minister from the continuous roasting on social media.

IT HAS COME TO MY ATTENTION that some people think Immigration Minister Peter Dutton should lose his job. They suggest that because this talented Australian has, arguably, made one or two minor indiscretions in recent times, he should resign or be sacked by the Prime Minister.

What utter nonsense! And a sure sign political correctness has gone completely mad in this country.

Before letting those fifth columnists at the ABC and Fairfax sway you with their vile propaganda, let me tell you a thing or two about Peter Dutton, and the fundamental principles and values that have guided him throughout his outstanding career.

Petrock "Peter" Dutton was born in Brisbane on 18 November 1970, the favourite son of an upstanding local house brick and a prizewinning garden vegetable. After school, he joined the Queensland Police Service Drug Squad, where he was known to be highly effective in working underground.

The first Newspoll taken since the 21 May Federal Election has revealed that Opposition Leader Peter Dutton is not very well-liked.

Dutton gave up Drugs - the Squad, that is - in the 1990s, deciding to go freelance, where he built up a highly successful business in a remarkably short period of time. He was soon unearthed by the Liberal Party of Australia, who planted him into the north Brisbane seat of Dickson. After weeding out former Democrats leader/turncoat and Labor Party Shadow Minister Cheryl Kernot from the seat, it was there that Peter Dutton's Parliamentary career first blossomed.

In his maiden speech, Peter Dutton immediately affirmed his core values, speaking passionately about the evils of trade unions and the civil rights movement.

Dutton's career further bloomed in 2004 when, after being re-elected, he was elevated to the ministry, being appointed Minister for Workplace Participation. So successful was he in his main task of sneering at unionists that, in 2006, he was promoted to the post of Assistant Treasurer and Minister for Middle-Class Welfare - a vital role in the Howard Government.

In 2007, Dutton was again re-elected, this time by the thumping margin of 0.26 per cent, where he showed his true character and commitment to the local community by immediately commencing a search for a safer seat.

Then, a few months later, in February 2008, Dutton displayed his dedication to traditional Australian values by striding decisively from the chamber during Kevin Rudd's Apology to the Stolen Generations - the only Coalition frontbencher to abstain.

As Opposition health spokesperson from 2010 until 2013, Dutton distinguished himself via some of the hard-edged interrogation techniques he'd acquired during his years on the Force, including never asking any questions at all during Question Time.

Peter Dutton has a history of cruelty and corruption, despite the mainstream media telling us we should give him a chance.

With a record like that, it came as no surprise to anyone that astute talent spotter Tony Abbott appointed Dutton as Minister for Health in his incoming Government. A committed reformer, the new Minister was blocked by a ragtag Senate from his goal of ending waste in the public health system - such as through a GP co-payment aimed at discouraging poor people from visiting their family doctor when they were sick.

His efforts were, however, recognised by the medical fraternity, with a poll in the Australian Doctor magazine ranking him as the worst health minister in 35 years.

Given that sort of positive PR, it was inevitable that Dutton would continue to flourish, with Abbott in December 2014 awarding him the vital task of securing Australia's borders. There, as Minister for Immigracism and Border Farce, Dutton continued Australia's sensible policy of deterring irregular immigrants in boats by locking them up in tin sheds on steamy, disease-infested, third-world islands.

Other notable achievements during his time in the Abbott ministry included the stalking of a Greens senator on a visit to the Nauru concentration camp, and sending his black-shirted private Gestapo into central Melbourne to stop and detain anyone seen acting suspiciously ethnic.

But wait. It's not all just about work for the customarily stoic Minister. He also has a lighter side - as shown in September 2015 when, just prior to a community meeting on Syrian refugees, he was inadvertently captured by an enormous boom mike, swinging just above his head, joking about the plight of Pacific Island nations facing rising sea levels as a result of climate change.

Funny stuff that. No doubt the islanders nearly wet themselves afterwards.

Given the Government's treatment of women and refugees, Peter Dutton's comments in the Sydney Morning Herald are pure hypocrisy.

Soon after this incident, Tony Abbott was rolled as prime minister by Malcolm Turnbull - but did that mean Dutton was gone as well? Not on your nelly!

Dutton was by now fully embedded in the ministry and still had important work to do. Like sending a raped, pregnant asylum seeker back to Nauru after she had requested an abortion and then lying about it afterwards. Such as calling a journalist a 'mad fucking witch' in a text message and then accidentally sending it to the aforementioned "witch" - who just happened to be a reporter at a metropolitan daily newspaper.

Fortunately, in a victory for fair-minded people everywhere, the witch reporter - Rupert Murdoch employee Samantha Maiden - was quite happy to laugh off the incident, saying she hoped Dutton wouldn't lose his job over this "strong sledge":

Exactly. Peter Dutton is a good spud. It is contributions like his that have made the administrations of Tony Abbott and Malcolm Turnbull as productive as they have been. Before turning up the heat and frying Dutton - and perhaps causing a spill - people should let him rest and continue to grow in his position.

Yes, letting Australia's highest ranking root vegetable continue as Immigration Minister is a sure recipe for success. And if anything goes wrong with his portfolio... well, who cares? They're only bloody boat people, for Pete's sake.

The Liberal Party is continuing its war on social media with Peter Dutton winning a defamation case over a Twitter comment.