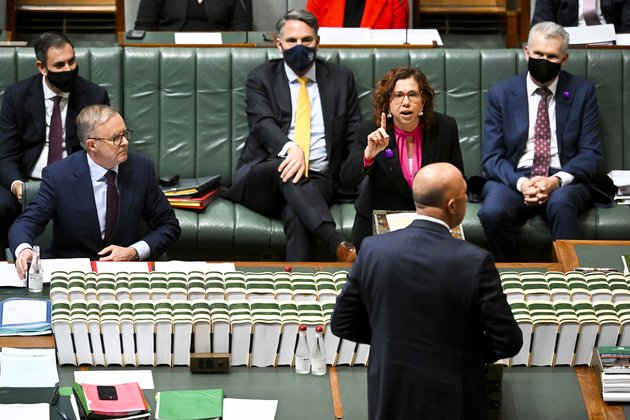 Has Labor learnt from the failure of the cashless debit card?

Legislation passed through the House of Representatives last night to wind down the cashless debit card (CDC), which was introduced into the East Kimberley and Ceduna in 2016 and since applied at other trial sites around Australia. The card compulsorily quarantines 80% of social security payments received by working-aged people.

Implementing the CDC has cost more than $170 million.

Yet research shows it does more harm than good to people forced to use it. First Nations organisations, social service organisations, and others have consistently argued against its expansion.

The Albanese government says winding back the CDC will "leave no one behind". But its legislation leaves more than 23,000 mainly First Nations people in the Northern Territory - as well as people in other parts of the country - on the BasicsCard, a longer-standing compulsory income management scheme run by the Department of Social Services.

Read more: 'I don't want anybody to see me using it': cashless welfare cards do more harm than good

We have known since 2014 that the BasicsCard fails to meet its stated objectives. Research published by the ARC Centre of Excellence for Children and Families over the Life Course found its use correlated with reductions in birth weight, falls in school attendance and other negative impacts on children.

These are significant findings. The research suggests several possible explanations for reduced birth weight, including income management's potential role in increasing stress on mothers, disrupting financial arrangements within the household and creating confusion about how to access funds.

Given the government's talk of respect and reconciliation, it's hard to know why it would continue a program introduced as part of the Howard government's racially discriminatory and widely criticised Northern Territory Emergency Response.

When the Morrison government attempted to move people in the Northern Territory from the BasicsCard onto the CDC, First Nations leaders were clear about how damaging the BasicsCard has been, and recommended genuinely voluntary schemes instead.

As shadow minister, Linda Burney supported that position. "Our fundamental principle on the basics card and the cashless debit card [is that] it should be on a voluntary basis," she said earlier this year, adding:

We have learnt a lot from the CDC, including how government claims that communities can decide about who goes on and off income management are often used to legitimise the continuation of compulsory income management.

Both the CDC and BasicsCard are ideas that were developed and lobbied for by the Australian political and business elite. They never came from the "community".

The BasicsCard was one of many measures implemented under the Northern Territory Emergency Response, which included the suspension of the Racial Discrimination Act and the use of the Australian Defence Force.

Read more: What happens when you free unemployed Australians from 'mutual obligations' and boost their benefits? We just found out

The CDC, on the other hand, was a key recommendation of mining billionaire Andrew Forrest's 2014 National Indigenous Jobs and Training Review. Since it was introduced, Forrest and his Minderoo Foundation have advocated for its extension.

The government used much-needed funding for local services as a sweeetener to gain communities' agreement for the CDC to proceed. In some cases, the threat of funding cuts was used in negotiations. In contrast, proposals from communities themselves for appropriate community- and Aboriginal-controlled services had long been overlooked.

Governments routinely use "consultation" as a label for what are essentially information sessions, with no alternatives on the table, in an effort to signal broad-based support. In the case of the CDC, calls for the program to be aborted or changed dramatically were long ignored.

Those who were forced onto the BasicsCard as part of the intervention were not offered a consultation process by the Howard government. And now, the Labor government has also failed to embrace their views and opted for a path of more consultation.

If Labor forces people to stay on the BasicsCard, what has it learnt from the CDC? Governments have spent more than $1 billion implementing the two failed compulsory income management schemes, and the new government has implicitly committed to spending more. Imagine what else this money could be going towards.