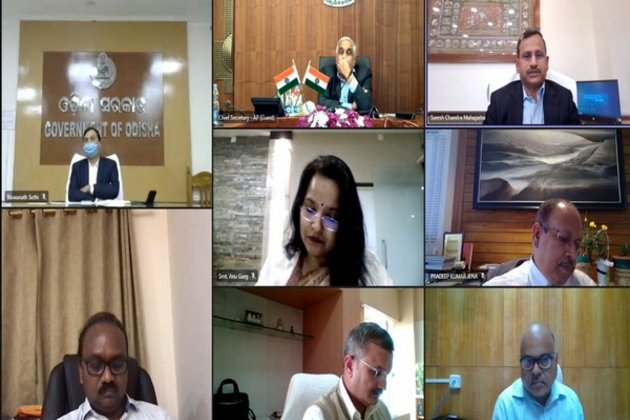 Bhubaneswar (Odisha) [India], January 11 (ANI): The first Chief Secretary level meeting between Odisha and Andhra Pradesh was held via virtual mode on Wednesday for mutual discussion of the bilateral issues.

"The meeting ended with a happy and encouraging note as both the sides could understand the issues from each other's perspectives through discussions. The major problems regarding inter-state transportation, road connectivity, filling of the teaching posts in Odia and Telgu medium schools and colleges operating in both the States, and setting up of Odia Language Chair in Dr B.R. Amedkar University at Srikakulam and Telugu Language Chair in Berhampur University were mutually agreed to be carried forward," read a press statement from the Odisha government. "Chief Secretary Odisha, Mahapatra highlighted the need for road communication to Swabhiman Anchal from Andhra Pradesh side. He said, the area was well connected through Gurupriya Setu and the naxal issues were curtailed significantly from Odisha side. Road communication from Andhra Pradesh side would add to ending the problem of left wing extremism in the area. Chief Secretary Andhra, Sharma welcomed the proposal and agreed to construct five major roads from Andhra side," added the statementFurther, Chief Secretary, Mahapatra made it clear that joint demarcation committee of both the states at district level would demarcate the border area where maps were clear and not under dispute.""It was further decided that the issues relating to Machhkund joint hydro electric project would be examined by the project administration committee (PAC) under the co-chairmanship of the Principal Secretaries of Energy of both the States. The meeting of the PAC would be convened shortly for carrying forward three small hydro-electric projects namely Balimela Dam Toe, Japaput SHEP, and Lower Machhkund SHEP. The matter relating to issue of no abjection certificates from both the sides for pump storage projects taking water from the reservoirs was discussed in detail. Chief Secretary, Mahapatra said that the certificates should be issued keeping in view the water share of each State as per the mutual agreement," said the statement.

Managing Directors of OSRTC and APSRTC would meet shortly for finalizing the terms and conditions of reciprocal transport agreement between two States. The meeting also resolved that the technical committee of both states would deliberate the issues relating to the proposed projects under water resources department.