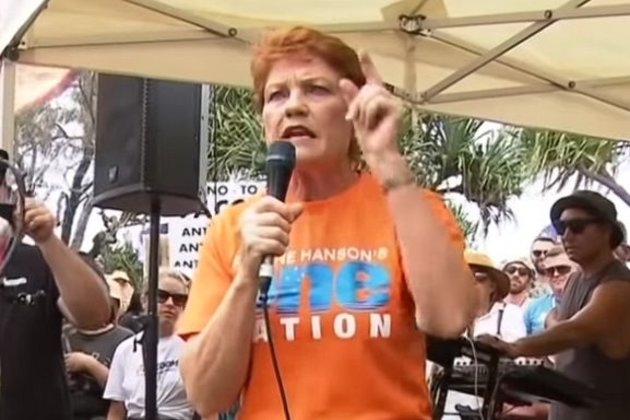 Between falling victim to COVID-19 and admitting neo-Nazis among their ranks, it seems members of the anti-vax movement have given up caring, writes Tom Tanuki.

PEOPLE IN THE anti-lockdown movement used to say they appreciated my commentary because in it was buried workable suggestions for them. I'm often a smart-arse about their movement but they had a point. I have always disagreed with them, but it doesn't mean I haven't illustrated ways they could be less useless.

I used to say that their movement lacked clear, tangible goals; implicit within that is the suggestion to be more explicit and set goals. (Whatever we think about the "Kill the Bill" protests, they blew up precisely because the movement had set itself a realistic goal for once.) I used to say they lacked medics, marshalls and so on. They've gradually recruited some.

In 2020, I used to say: well, at least it isn't another White nationalist or neo-Nazi wave. For an anti-fascist, that honestly felt like a step up. It was refreshing to remark on a movement I disagreed with but didn't necessarily hate.

Over the course of 2021, I find I've become a veteran member of a shrill, inverse-cheerleading band of lefties telling anti-lockdowners to do something about their continued association with Nazi parasites. Or their growing propensity for violence. These calls are not getting through.

I can't even seem to let them know about risks to their own health.

The current anti-vax movement is starting to show signs of White nationalist politics as spouted by Fraser Anning in 2019.

Cam Wilson recently wrote about anti-lockdown influencers coming down with COVID-19 one by one. I was trying to warn them. I'd privately and publicly message any anti-lockdown organiser or movement member who would listen. Could they maybe tell their own people to get tested, please? Didn't happen. They're creating a pretty sizeable outbreak all by themselves now, but it seems they wouldn't dare risk the reputational damage of telling their COVID-19 denialist followers to consider a PCR test.

Recently, I discussed a member of the movement who got COVID-19, then said she didn't have it while coughing through a livestream before uploading a test result she thought read negative. But it actually showed a positive result. She just hadn't read the packet correctly.

She'd been camping out all week at Parliament House with other COVID-19 denialists, so honestly, I just wanted her to tell her people to get tested. Instead, she blocked me and tried to report me to YouTube for defamation for simply pointing out her infection in public. Now she's telling her followers that she thinks the police sprayed something on the protesters that had COVID-19 in it. There you have it - the shittest conspiracy theory of the entire pandemic.

Yes, Leila, there's something that got sprayed on the protesters that had COVID-19 in it. It's your breath, Leila. That's why people wear masks, Leila.

Another anti-lockdowner who contracted COVID-19 on the Parliament House steps commented on my Instagram:

I tried to let this person know, as gently as I could, that this is what masks and social distancing measures are for. I am watching people, forced by their own personal change of circumstances, finally obtain March 2020-tier knowledge about the novel coronavirus.

This insular ignorance is first modelled by the influencers. TikTok "comedian" Jon-Bernard Kairouz took an anti-lockdown turn a few months ago, attended a Sydney rally and caught COVID-19 along with his father - who ended up in an induced coma. Rather than rethinking his approach, or even just notifying his followers about the fate of his seriously ill dad, Kairouz is just back to doing "comedy" about lockdown restrictions again.

Why would any of these people warn their followers to protect themselves or their health? What does that have to with building a following? That's the mentality.

Avi Yemini and his ilk are anything but journalists

Right-wing propagandists calling themselves citizen journalists are nothing more than frauds and opportunists.

So we can't get through to them about their own health. What, then, is the chance of convincing them of dealing with some fascists hanging around their rallies?

When I try to attempt that conversation with anti-lockdowners, they start out thinking I'm calling them a Nazi. (I only call actual national socialists Nazis. There's a few around.) I tell them I'm not talking about them specifically - I'm talking about other people permeating their movement. Then they point to, say, a Black person at their rally, or an LGBT flag as proof of their diversity. I tell them I'm not questioning the diversity of their rallies. I'm telling them they have fascists in their ranks and they should disavow them. These are muddled, circular conversations that they don't understand or care much about.

But this discussion was streamlined for me last weekend. At an anti-vax rally in the Gold Coast, they let Pauline Hanson be headline speaker. So now Pauline's tucking her 2022 Federal Election campaign behind a convenient anti-vax facade. It's one thing to disregard a group of fascist parasites at your rally - quite another to pretend you can't see the politician on the main stage, a veteran icon of racism in Australian politics, leading your entire event.

One of these people recently said to me: "But Pauline's the only one saying what we want to hear in Canberra!"

I want to tell them that having principles is sometimes a matter of who you choose not to stand next to. Anti-fascists talk a lot about Karl Popper's paradox of tolerance: the idea that in order to maintain a tolerant society, the society must be intolerant of intolerance. This is very simple to apply. If your movement has the numbers, you don't need it to be co-opted by letting in opportunist parasites like Pauline Hanson. Or fascists. So just... don't let them in, if you don't agree with them. Organise to have them kicked out. Removed. Not allowed, at least, to headline your entire event.

But then I remember I'm dealing with populists. Not fascists. Not libertarians. Not "freedom activists". Populists. That's worse.

In Slavoj Zizek's essay 'The New Populism Is Not Fascism', he discusses the new-era populism of Trump and thereafter - and elucidates the difference between it and fascism:

Citizen journalism on the rise in Australian fringe politics

The anti-lockdown movement has given a platform to "citizen journalists" seeking fame and determined to incite hate and disturb the peace.

Pauline Hanson's major contributions to politics have been promoting racism in Parliament and invariably supporting mining interests. Big money and easy, racist culture wars. That's her. People like her benefit from societal tensions and hysteria but they do not envision real, lasting change. They tell each other that any proposed systemic change is "communism", even down to the meagre collectivist measures of the Morrison Government or state governments, which saved so many Australians' lives through 2020. If only.

Everyone, it's said, is a socialist in a crisis. We need international collectivism to get us through the pandemic, globally vaccinated, working in partnership. We'll need that approach for the climate catastrophes to come, too. But Pauline Hanson cannot imagine a new world. Her talent in life is locating the right chooks to feed ahead of her next federal election campaign. Before, they were racists; now they're anti-vaxxers and it'll be racists again, soon enough.

The protesters on the ground show us they can forgive Pauline's decades of racism as long as they hear her repeat their conspiracies. They don't care. They won't care if we tell them they're becoming violent, or that they're letting Nazis in, or even if we say they're endangering each other. What does any of that have to do with building numbers at their rallies? Or securing a spot in the Senate? Or having a big livestream?

This is the unadulterated populism of the anti-lockdown movement. I never agreed with them, but at least we could talk once. Now, they've sold themselves down the river to craven far-right hacks in Canberra on one side, while growing contagious - and violent - on the other. Their hypocrisies aren't reconcilable, until you understand they aren't interested in being consistent or having principles. They're populists. We can't talk to them because it's not in their interests to hear us.

Tom Tanuki is an online satirist, social justice commentator, writer and comedian. He has worked in anti-racist political comedy, most notably through his satirical group the Million Flag Patriots and anti-racist group Yelling At Racist Dogs (Y.A.R.D.). You can follow Tom on Twitter @tom_tanuki.