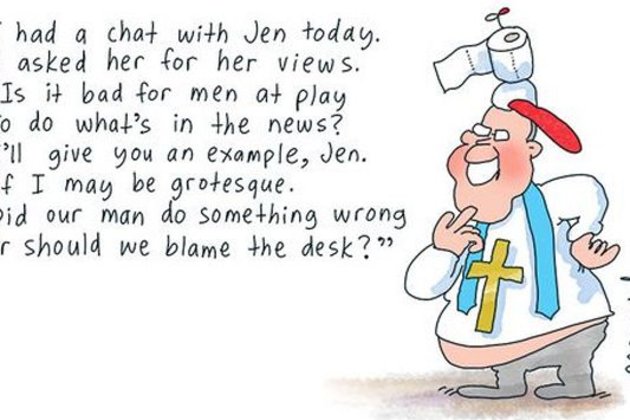 Real men need to speak up against the entitled minority

The rape problem isn't going away and men must speak up against the entitled minority that furthers it, writes A L Jones.

WHY IS THE PROBLEM of sexual assault so intractable? Why, despite increasing community awareness, is progress so slow?

Sometimes, taking a long view - in this case, five-odd millennia - can sharpen our focus. If we know why things are as they are, we can better target our action.

A key reason for the lack of progress is the ancient idea - voiced nowadays by an entitled minority - of rape as an apt penalty for women's "bad behaviour". When the little girl behaves badly, someone, preferably her father, must smack her bottom.

When the big girl behaves badly, well, what does she expect? She must have known what she was getting into - out late, drinking, without a chaperone. Her bottom should be smacked as well, said a prominent radio announcer.

Just as an aside, when a man is sexually assaulted - recent cases involving "mates" wielding broom handles or beer bottles come, painfully, to mind - is he publicly castigated for bringing it on himself?

Coalition's misogyny stems from a history of female oppression

The key to ending the misogynistic attitudes of our governing politicians may be in examining the history of the Western patriarchy.

Does he deserve a good smack for getting drunk or not knowing his drink was spiked, or for where he was, when, or who he was with?

Why is rape, according to this entitled minority, apt retaliation for women's bad behaviour? For the answer, we must look to the history of gender relations.

Way back in the mists of unrecorded time, and long before the invention of writing, the so-called beastliness of Woman already loomed large in oral lore. The affliction, it was said, was caused by her rampant sexuality.

Hold up, I hear you say, who said women's wickedness was about sex? After all, the Hebrews told us Eve ruined everything by eating an apple offered by a snake and hence finding out stuff she wasn't supposed to know. But, barring Freudian theory, there's nothing sexual there.

That is until the serpent turns out to be another woman, named Lilith, who turns out to have been God's first go at providing a helpmate for Adam. Lilith's behaviour as first Woman was atrocious.

Assuming herself to be Adam's equal, Lilith would not adopt the subservient role, including the recumbent sexual position demanded by Adam. They fought. Angry as hell, Lilith flew off to copulate with a demon or two (more adventurous, those demons) and refused to come home.

Not to be outdone as victims of divine capriciousness, the Greeks grumbled incessantly about Pandora, their first Woman.

From this 'beautiful evil,' said Hesiod, 'which was sheer guile, not to be withstood by men, is the deadly race and tribe of women who live amongst mortal men to their great trouble'.

Here, again, why did the ancients blame Woman's sexuality for the angst she caused men? Why not her lousy cooking, or ironing? You guessed it - poor culinary skills do not threaten - not directly, anyway - the purity of the divine patriline.

What is that exactly? The story goes that God passed his divine seed - carrying his divine spark of life - to Adam. Adam did as God instructed and passed it to his male descendants and so on.

Keeping God's patriline secure, that is, keeping foreigners away from "our women", required more than the usual gang going around raping those clearly asking to be put back in her place. To achieve and maintain patrilineal purity required a system.

Of course, there had already been the great purge. Ages before writing popped up, the ancient poets sang of that coalition of storm gods, which, for 25 centuries, fought to end the timeless reign of the Great Goddess. They did so, not merely by massacre, but via an enviable propaganda machine that churned out false - though just plausible enough - ideas about men and women.

By 3000 BCE, the idea of the father as the sole generating parent had already taken hold. 'I created, on my own, every being,' said the Egyptian god, Atum. 'My fist became my spouse. I copulated with my hand.'

And Aeschylus: 'The mother of what is called her child is not the parent, but the nurse of the newly-sown embryo. The one who mounts is the parent.'

Men give life, said the old men - women merely give birth. The mother is no more than the nurturing medium, the soil, for the man's seed-child.

Aristotle, who infamously declared that 'the female is, as it were, a mutilated male', elevated the notion - that men alone could give life - to the status of scientific truth. And with the Aristotelian revival in 1200s Europe, the idea entered the natural-philosophical canon. It remained there for more than 500 years.

Carla Bennett breaks down step-by-step the best way to survive a sexual assault and to prepare yourself for a lack of justice in the end.

'The active power of creation in the male sex tends to produce something like itself, perfect in masculinity,' said Thomas Aquinas. 'A female is a result either of the debility of the active power, the material, or external influences, like the south wind, which is damp, as we are told by Aristotle.'

Oh, how often do we still hear that little gem, "as we are told by X"? Gods and Platos, Jesuses and Marxes, Stalins and Hitlers, Maos and POTUSes... you name them.

Aristotle set the scene for Woman - that victim of soggy southerlies, that "mutilated male" hooked on Satanic seduction - to be accused of posing an alarming threat to patrilineal security.

So how, exactly, did she activate that harm? The story goes that just as seeds from plants can sprout long after being sown, foreign seed from previous sexual encounters can "sprout" into pregnancies. Worse, the dangerous foreign seed permanently contaminates the field.

Enter the System. Eternal vigilance, as they say, is the price of a takeover.

The System gave men the right to own women's bodies, their premarital virginity and their marital fidelity. Through covering women's bodies, through genital mutilation and through cloistering, a great deal of foreign seed was seen off.

Of course, the key problem for the family patriarch was that if other men thought he couldn't "control his women", they would see him "as weak as a woman".

His honour - namely, his masculinity - would disappear. He would become as Woman is, that is, as nothing. The fear of the brotherhood seeing them as worthless is why some men still engage in honour killing.

After years of our nation being governed by a misogynistic boys' club, Australians have the power of choice in the next election.

As to the Christians, chastity codes into the 16th Century barred women from leaving their houses (for example, to attend mass) without their "portable domestic space" - the veil.

Crucially as well, systemic control of women's reproduction also guaranteed an infinite supply of pedigreed warriors to wage endless war in the name of perpetual growth.

Back in the present, which rests heavily on the insane legacy of the past - what to do?

The minority that views rape as a justified penalty for women's bad behaviour interprets other men's silence as tacit agreement.

The minority, seeing itself as guardian of all men's God-given rights, fantasises about how other men must envy it for its courage to inflict what lesser men should, but don't.

Real men, says the entitled minority, are brave and tough enough to rape and kill in the name of masculine honour. The rest are pussies.

We need informed men to speak up. The entitled minority doesn't listen to women. When men - hitherto silenced by fear of the brotherhood - speak up, only then will things change.

An ABC News item cites current research on how online anti-women hate groups are actively recruiting young Australian men. The groups label women as "evil" and call for men to rise up and crush women, to rape and force them into sexual servitude and to murder them. The ABC item also cites studies showing that sexist attitudes are now much higher among younger men than among older men; a third of men under 35 disagrees that women deserve equal rights to men.

A L Jones is a psychologist and author of several published books and numerous articles on gender politics.