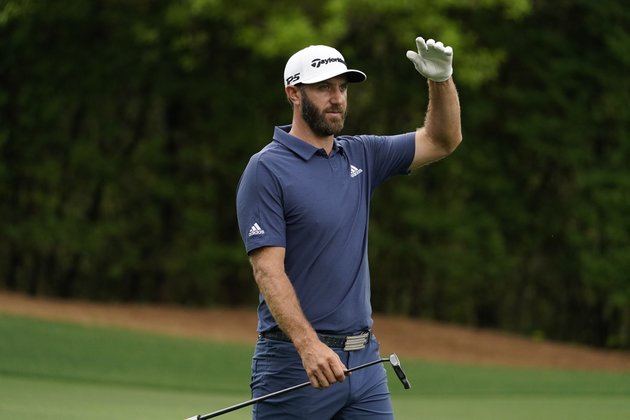 Dustin Johnson's only remaining duties at the Masters will be to place the Green Jacket on the new champion.

Johnson saw his bid to defend his title bottom out badly as he finished 36 holes at 5-over-par 149, two shots off the cut line at Augusta National in Augusta, Ga.

"Obviously, a lot lessstressful walks, but still, obviously I wanted to be around for the weekend," a disappointed Johnson said after shooting a 3-over 75 in Friday's second round. "I like this golf course. I feel like I play it very well. I just didn't putt very good. It's pretty simple."

Johnson wasn't the only big name who missed the cut.

"Obviously it's disappointing because I love the Masters," said Garcia, the 2017 champion at Augusta. "If I didn't love it, I wouldn't care. You know, it would be nice to get a little bit more love from the course sometimes, you know?"

World No. 1 Johnson never found his flow on Friday. He carded five birdies but also had six bogeys and a double bogey on the par-4 fifth hole. He collapsed down the stretch with bogeys on three of the final four holes.

"Mostly just the putter," Johnson, a two-time major winner, said of his struggles. "Six three-putts in two rounds, you just can't do that. Obviously didn't drive it great but drove it good enough, and I felt like I even left myself -- never was really too bad out of position, just the three-putts killed me.

"You take all the three-putts away, I'm 1 under. That was kind of the difference. But yeah, I just didn't putt very well."

Koepka was playing this week solely because the event was the Masters.

He dislocated his right kneecap and sustained ligament damage in a freak household accident last month, and he underwent surgery on March 16. Walking the course the past two days wasn't the easiest thing for the four-time major champion.

"I wouldn't have been playing for another month if it wasn't this week," Koepka said of the Masters, "so I'll take a nice long break after this. Way I look at it, I have two more days to do rehab that I probably wouldn't get if I was out here, and I'll get ready for the PGA (in May)."

Koepka had two birdies and five bogeys on Friday.

"Putter was ice cold, didn't make any putts," Koepka said. "I don't want to say the speed was off, maybe the reads a little bit. Maybe the start line. I'm not quite sure. A lot of them felt like good putts, and they just -- they weren't even hitting the hole."

McIlroy's round was slightly better than his opening 76, but it wasn't enough to keep him in the mix. He had two birdies, two bogeys and a double bogey on the par-4 10th hole.

McIlroy didn't stick around for his post-round media responsibilities after missing the Masters cut for the first time since 2010.

A four-time major winner, McIlroy is in a long drought with his last big win coming in the 2014 PGA Championship.